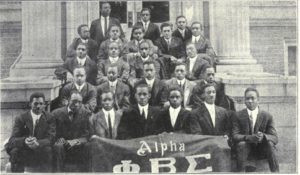 The Founders deeply wished to create an organization that viewed itself as “a part of” the general community rather than “apart from” the general community. They believed that each potential member should be judged by his own merits, rather than his family background or affluence…without regard to race, nationality, skin tone or texture of hair. They desired for their fraternity to exist as part of an even greater brotherhood which would be devoted to the “inclusive we” rather than the “exclusive we”.

Strengthen and serve proactively the brotherhood, as a supportive resource that positively impacts the Fraternity’s growth and financial solvency.

Reaffirm and maintain a strong commitment to brotherhood, scholarship and service.

Exhibit integrity and ethical behavior in conducting the Fraternity’s business. serving as a model for all Greek-letter organizations.